Looks like the DI did actually send a photographer to the Evanescence concert… they just never bothered to publish a story or any photos about it until now. Basically, they’ve got a feature on the DI Finest Photos of 2004 (little presumptuous seeing as the year’s not even half over). But apparently, they thought this photo of Evanescence was one of their best of the year. Why it wouldn’t have warranted publishing earlier on that basis, I don’t know. Maybe they should have titled it “Finest Photos for Stories We Didn’t Publish.” 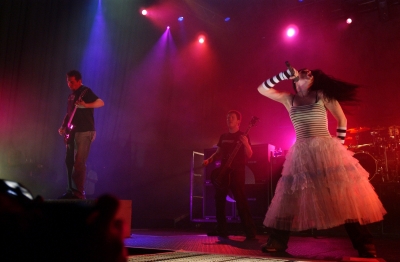