Nintendo’s finally announced the controller for their next-gen console (the Revolution). Does anyone besides me find it bizarre?

Sounds like it’s somewhere between a one-handed tv remote and an old power glove? There are apparently a couple of sensors placed near the tv plus a sensor in the remote that detect position and orientation. They plan on supporting other “more traditional” controller types (conventional controller shells, dance mats, bongos, etc) by slipping the remote inside these other add-ons. One example they have demonstrated: 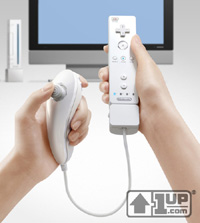 A traditional thumbstick with a pair of trigger buttons will hook into the bottom of the remote. Nintendo refers to this as the so-called ‘Nunchaku’ configuration (the two bits are connected by a short cord), which may be amusing to anyone familiar with the work of Michelangelo. :)

Apparently their motivation is to differentiate themselves from Sony and Microsoft, and at the same time open themselves up to a whole new class of gamer. Nintendo has traditionally targetted a younger audience, whereas Sony and Microsoft have largely targetted the 20-something male gamer who grew up on Nintendo’s earlier stuff. This time out, Nintendo’s trying to hit up people like Mom and Grandma by designing an unintimidating controller (since it’ll seem awful familiar to them if they’ve ever used a tv) and a gameplay style to match. But somehow they claim they’ll still find a way to make it a satisfying experience for people who’ve been playing games for years. Guess we’ll just have to wait and see. All things considered, I’m REALLY looking forward to the new Zelda game that is slated to come out sometime around the beginning of November!