Have some pics up from my trip to the bay area up at Flickr: 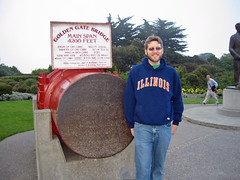 Was a good trip overall. Real good to see Richy and Carrie and get to hang out with them some and see some sights. Got up to the Golden Gate bridge, although didn’t see that much since it was really foggy. Headed down to the Fisherman’s Wharf and wandered around there for a while checking out the sea lions and Ghirardelli and such. Took a hike up to the really curvy portion of Lombard street that has appeared in a lot of movies. Pretty wild. The incline is so steep they had to cut back and forth several times to make it safe for horses to travel down when hauling wagons. Also got over to see the Winchester Mystery House in San Jose. Was quite a trip since Amanda and I have seen it on a number of tv shows (haunted US oddities). Really bizarre.On a relatively unrelated note, Amanda and I carved pumpkins last weekend (i.e., the Saturday before I went out to California). She did a cute little ghost in front of a tombstone and I did Tux the Linux penguin. Photos up at Flickr. :) 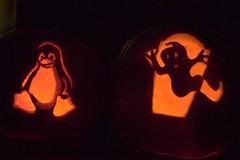