So apparently Dell is now shipping a 20" widescreen LCD ala the Apple Cinema dispay. Looks like it’s got pretty sweet specs in addition to being priced several hundred less than Apple’s. Now if only Dell would have some outrageous deal on it. :) 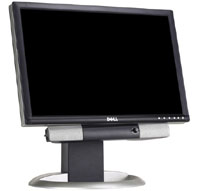