Took some pictures of the snow yesterday and put them up on flickr: 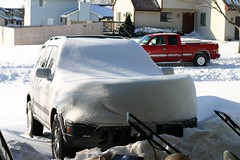 We definitely got a fair bit of snow, and some of the drifts were pretty impressive. Unfortunately, the winds and the city plows concentrated and packed the snow on our side of the street (but it did mean our street was plowed a few times as opposed to the more minor streets that maybe saw one pass… benefits of being a city and school bus route). Fortunately, while I was out there starting to shovel when someone driving a pickup with a plow attachment came by to do the neighbor’s driveway. Asked if I’d like ours done as well for a small fee, and I jumped at the chance. Good thing too because it left some impressive snow piles that I don’t like the thought of making with a hand shovel: 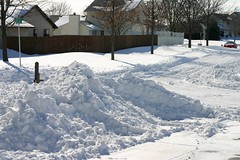 There were also some pretty neat patterns in some of the snow drifts that I thought made cool pictures: 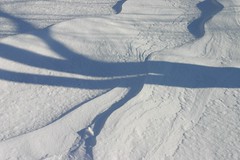